The CRKT Pilar, designed by Jesper Voxnaes for Columbia River Knife & Tool, has taken the knife community by storm. It represents a significant improvement in size and ergonomics over the CRKT Squid, which was another huge hit when it was released. Whether or not the CRKT Pilar is the best pocket knife is debatable; that’s a lofty title, but then again, the Pilar is a great knife. 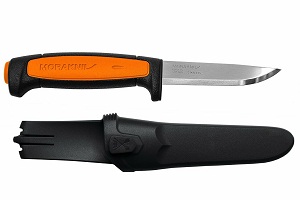 The CRKT Pilar is graceful and practical in all the ways the Squid is not. Named after Ernest Hemingway’s sailing vessel that was used for covert reconnaissance in the Caribbean during the Second World War, the Pilar sports amazing ergonomics, a solid lock, and a blade that, despite its construction from a budget steel, is a serious beater.

The standard CRKT Pilar is made from 8Cr12MoV steel and sports a satin blade and similar, solid steel scales. Tipping the scales at 4.2 ounces, it’s a hefty little pocket knife; open, it’s 5.94 inches long and it sports 2.40 inches of blade length.

The blade appears in the likeness of a modified, attractively swedged sheepsfoot. It is made from incredibly thick blade stock, especially for its diminutive size. The grind is flat, and from the factory, the edge typically comes nearly sharp enough to shave with.

It features a gracefully swept belly and a fairly obtuse point that, despite not being particularly well suited to puncturing or piercing, doesn’t do a poor job of them either. This is definitely a pocket cleaver made for slicing and chopping, but it can still tackle detail work.

The ergonomics of the blade are excellent. While the scales are slightly small, there is an extremely generous choil behind the cutting edge; looping your index finger under there, in a saber grip, or your thumb against it, in a reverse grip, is extremely comfortable. For the purpose of leveraging the cutting edge in a standard saber grip, there is an extremely generous thumb scoop in lieu of jimping; it’s practical and comfortable.

Deployment of the CRKT Pilar is also a breeze. While the action is a little stiff from the factory, it limbers up admirably with use. One-handed opening is easy; instead of thumb studs, the blade features sharp but not uncomfortable thumb holes. A little bit of practice and this knife will flash open readily and lock open with a satisfying “thwack.” Opening and closing are easy without being too easy if that makes any sense.

This knife features a recessed frame lock system that is both very easy to engage and easy enough to disengage without being poorly designed or dangerous. Fans will love the fact that this knife is made with a frame lock instead of a liner lock locking mechanism; frame locks are stronger and can handle abuse, which a heavy little knife like this begs for.

As far as carry is concerned, this knife is a little bit heavy to carry freely in a pocket without noticing the weight, but it can easily be carried via the reversible pocket clip as well, in which case the weight balances nicely.

As for whether or not it is the best pocket knife, let the following facts speak for themselves. The Pilar has been such a hit, it has been modified into several variants, including the Pilar Large, the Pilar III, and Pilar models made with D2 blades and copper scales, respectively.

It’s hard to beat a model like this for an EDC knife; its stainless steel blade boasts both high corrosion resistance and decent edge retention, and even though the latter is not excellent, the steel is soft enough that it can be resharpened easily.

It also wins on price. You can pick up a CRKT Pilar right now off of White Mountain Knives for under $35. At a price like that, it almost costs more not to get one. Besides, if you don’t like this one, there are tons of other high-quality pocket knives on their website (also at great prices) that ship for free. Check out their website today at WhiteMountainKnives.com and send them a message at WhiteMountainKnives@gmail.com if you have any questions.